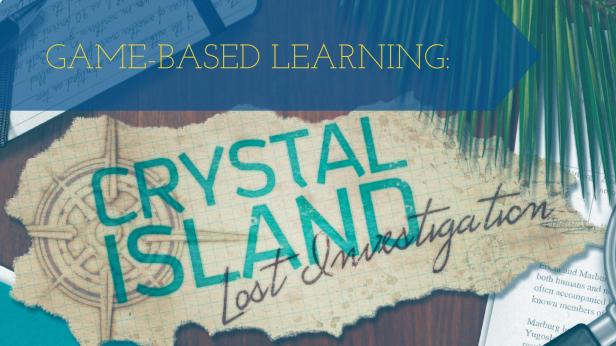 In this article, a game-based software was developed to help improve student learning in the area of life science. The game is called Crystal Island. It is narrative game that was first developed for middle school student and is now available for elementary level as well. It provides a learning experience that walks the student through a scenario whereby a group of campers fall ill. The goal of the game is for the player to figure out the cause of the illness. The game was used as a method by which to teach Middle School students life science standards associated with the North Carolina State Standards.

The results of the game have shown in increase in student learning after the students have played it. A pre-/post- test was given to the students and results have show that the students had a better handle on the standards embedded in the game then before they played the game.

Three versions of the game were created and tested to see which worked the best for learners.   For each of the three versions, the one version that provided the most guidance demonstrated the high performance gain for the learner.  The base version that provided no help had the least performance gain.  As noted above, all versions helped the learner.

The affective domain was targeted during game development and became an important part of student interaction with the game. The article referred to “affect-sensitive game-based learning environment”. Essentially the person’s emotions matter as the game is being played. Positive motions provide for a positive learning experience while negative emotions can provide for a negative learning experience. Knowing this information, the game designers are using it to shape the structure of the game to insure positive engagement.  At regular intervals the learner would have to stop and rate how he or she felt based upon certain emotional criteria at that point in the game. Feelings such as “anxious, bored, confused, curious, excited, focused, and frustrated” where shown through emoticons and the student would select the one most appropriate to how he or she was feeling that moment. An important distinction was made between the actual game mechanics and the standards upon which the game mechanics try to carry out. For example there were areas during gameplay such as note-taking that were mentioned as not being particularly interesting to the student (negative emotion) but was part of the standards so the learner endure it. Additionally a focus on student personalities were mentioned. There may be different emotional reactions pending upon different individual differences between students.

This article points in a positive direction for narrative-based games. Even though the technology and development of this system seems incredibly complex, the outcome is showing to be beneficial to the learner.  The importance of continual help throughout a game seems to also be something that needs to be looked at more in depth and perhaps be a standard experience on all future games. What’s the article stating that there was a “strong positive relationship between learning outcomes, in-game problem-solving, and increased engagement”.

Goals for this semester: 1.) Assume my role as a scholar by being confident in who I am what I have to offer to the larger community. 2.) Know that the research I do has merit and value to the the larger body of research. 3.) Use my life experiences in tandem with research to help develop a better scholar and contribution to research.